I’m sure this question will demonstrate my taxonomic ignorance, but (in r95 at least) why are Strep. oralis/mitis/dentisani/australis/pseudopneumoniae species clustering together in the phylogenetic tree.

Could you please clarify your concern a bit more?
Those species are not clustered together in the GTDB tree if you mean clustered in one species.
There are many genomes that are claimed to be from either of those species and thus appended with the suffixies to distinguish from those derived from the type strains of the species. It would be good if you could just explain in details where is your concern.

Thanks Masha. Here’s an illustration from r95 (Tree Explorer): 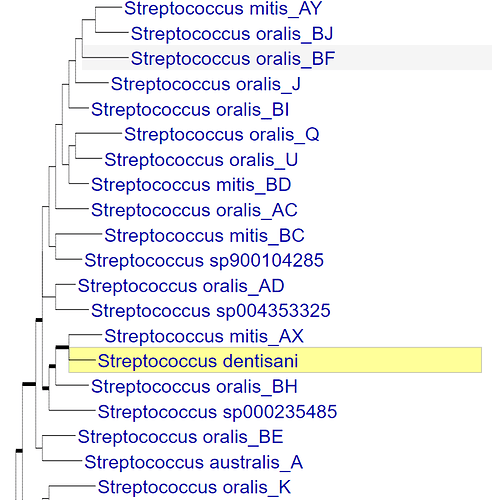 I think I had misunderstood that the alphabetic suffixes were simply where an NCBI species had sufficient genetic diversity to be split into additional species. Whilst this is true, I now understand the story is more complex, and genomes annotated as belonging to an NCBI species may cluster closer with genomes from other NCBI species than with other similarly named NCBI species.